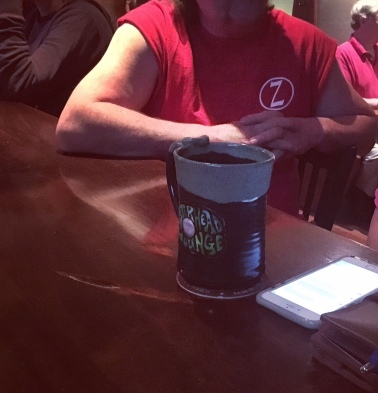 I’m in a fairly upscale pub in Damariscotta, Maine. It’s a renovated old inn with modern touches, clearly intended to draw a certain crowd. The Olympics are playing silently on a screen in a corner. I observe a couple drinking out of what seem to be the “local’s mug.” There’s about 300 of these mugs hanging from the ceiling with handwritten numbers  on their bottoms.

I ask them,”So you’re from here?” Yes they are.  “What are these mugs about?” I ask. “20 oz for 16 oz. And they never seem to end,” comments the woman. I’m trying to decide what to order so I ask, “What’s you’re favorite dish?” Caesar salad with blackened haddock. I order it.

They introduce themselves as Jim and Kathy, locals. A political ad appears on the television screen. Offhandedly, Jim comments that our government is spending money with no accountability. He’s frustrated that politicians talk reform, but never seem to make change. I agree with him, and suggest that another big issue seems be the disappearing working middle class, how so many are struggling to maintain or create a decent life for themselves and family. Kathy agrees, and mentions how people in this area have second and third jobs just to keep going.

“Where are you from?” Jim asks. I tell him I live in the Worcester area, and work in the Boston area. “Ah Worcester!” He beams. “We go down to the north end in Boston. We love it. We also go to Gloucester.”

His face darkens a bit. He asks “Have you seen The Perfect Storm?” I nod, yes I had seen the movie and read the book. “Such a story.” Then he tears up. “Those women. They waited for their men. And they helped each other.” I mention the large bronze statue in Gloucester of the mother with her two sons, looking out at the ocean. Waiting. It had moved me.

Jim nods. “It’s not like that around here. We don’t have that. People, they don’t really know each other. Or help each other.” Kathy adds, “Fishermen just go out and come back and the families do their own thing.”

So finally I ask, are you a fisherman? Jim nods again, “Yup. I used to be.” I ask him what he fished. “Lobsters in the Summer. Shrimp in the winter.”And then after more banter, he says,”Then my boat sunk. In December.”

There’s noise in the bar, and I could only hear bits of what he was saying. The story came in pieces. “I was in the water for 35 minutes.” Then,”The waves would wash over my hands, melting the ice and then refreezing.” Seconds later, “In the ambulance, I was shaking so hard I was jumping off the bed.” Finally,”I only had 2-3 more minutes before…” He looks down.

“So you never went back out after that?” I ask. “No. No, I didn’t.” Then we talk about the crazy driving in Boston, laughing about how much it scared us.

We pay our bills, and wish each other well. On my way back to my B&B, I reflect on his story, and his observations about his community. I had grown up in a town near Gloucester. I had a feel for that bonded culture of the fishing community,  in an outsider kind of way. I had thought it was common.

What We’re Talking About